If it is not economically viable to save the planet, then the economic system is wrong.

1. Glimpses of the Naughties

Collected posts from the You'll See Glimpses blog from 2000 to 2012 (plus a free recipe for Saving the World). 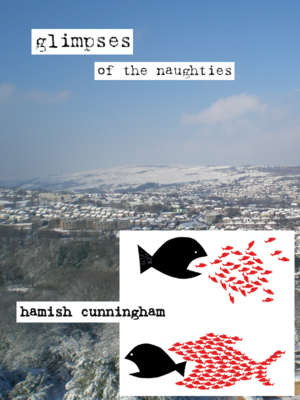 As we hurtle headlong into a whole family of abysses, like babies we sit drooling before a resplendent multimedia defecation of misdirection (in ever more lifelike colours). Soon the shit will even smell sweetly at us from our personal plasma-screened consumer heavens. But the Weapons of Masses Distraction are getting blunt with overuse, and with the ever-widening gulf between media bullshit and harsh reality we also step closer to a mass truth jailbreak.

Ian Dury knew what I meant:

Before I stop, here's a last glimpse into the general future.
Home rule will exist in each home, forever.
Every living thing will be another friend.
This wonderful state of affairs will last for always.
(You'll See Glimpses, 1980.)

"Keep Calm and Carry On", said the WW2 poster with typical British reserve — but we've been too far down that road and now we're going to get lively and boogie on into another world. It's possible. In fact it's necessary. Are you coming?

Revised and expanded version of the GATE user and developer guide. On Amazon. Now a little out of date — see GATE.ac.uk for the latest version.

The blurb: "GATE is a free open-source infrastructure for developing and deploying software components that process human language. It is more than 15 years old and is in active use for all types of computational tasks involving language (frequently called natural language processing, text analytics, or text mining). GATE excels at text analysis of all shapes and sizes. From large corporations to small startups, from multi-million research consortia to undergraduate projects, our user community is the largest and most diverse of any system of this type, and is active world-wide. This book contains a highly accessible introduction to GATE Version 6 and is the first port of call for all GATE-related questions. It includes a guide to using GATE Developer and GATE Embedded, and chapters on all major areas of functionality, such as processing multiple languages and large collections of unstructured text. It also includes complete plugin documentation (e.g. named entity recognition, parsing, semantic analysis, , as well as details on other members of the GATE Family: GATECloud.net, Teamware, and Mimir. To join the GATE community visit GATE.ac.uk."

Report on our Schloss Dagstuhl seminar, notable for our proposal to ban Google (sort of).

4. The Information Retrieval One

Insomnia? Knock yourself out with 20 years of paint drying.